by alanwarren.18
Sorry - missed one that is currently for sale on the Delcampe auction site:-

Hope this is helping people.

by cardman
Hi - just found this forum. I have been collecting Wrench cards for many years and have around 6000 listed. To fill in some blanks on Alans list from last April here are a few from the early part.

by peternam
I've just come across this forum and this thread

I am researching Evelyn Wrench and his postcard business. Although I am not a postcard collector per se, I have been starting to collect Wrench cards to support my research.

Evelyn Wrench set up the business in late 1900 and received his first cards (printed by Stengel of Dresden) on 29 November. He set up a partnership, E Wrench, in February 1901. This ran until September 1902 when the business was transformed into a limited company, Wrench Limited, which went into liquidation in July 1904. Evelyn Wrench was no longer associated with the postcard business from that point.

However, a successor company, Wench Postcards Limited was formed in January 1905 and liquidated in July 1907 but probably stopped trading in 1905 / 06.

I am primarily interested in the cards published up to July 1904. I have approximately 900 of these cards and I have logged a further 4,000 or so. I am trying to get to the bottom of how many cards were published up to July 1904.My researches indicate that the Wrench business that existed up to that time published about 10,000 cards. Although I would not say this is definitive, I think it’s fairly close to the truth

This number excludes cards published by Wench Postcards Limited (from January 1905) which include The Rambler Series and probably cards that started with a leading zero. I don’t think many cards were published by this business which seems to have relied on the stock left after the liquidation of Wrench Limited in July 1904. But I am not absolutely certain about this

As regards the earlier correspondence in this thread:

• Record keeping in the business was somewhat erratic – and caused immense stock keeping problems in 1903. For example: card numbers were duplicated, some cards were reprinted with numbers that did not correspond with the original etc.
• The numbering system started at 1 and was possibly complete up to 1,000. From then on, there are probably a number of gaps. The 25 cards in the Links of Empire Series (published in 1901) had a different numbering system
• The highest number I have is in the 50,000s but this may have been published by Wrench Postcards Limited rather than Wrench Limited.
• Cards up to number 10,000 were almost exclusively black and white – some were hand coloured in 1903. 10,000 to 11,000 included a whole range of different cards (cartoons, cards printed by photographic methods etc). From 11,000 to 16,000 cards were exclusively colour (or at least I haven’t found any monochrome). After 16,000 cards were predominantly monochrome but included a number of coloured cartoons
• I suspect that cards up to 16,000 were numbered in rolling order. Thereafter I think there is a mixture of early printed cards (perhaps published in 1902 and certainly 1903) and later printed cards

As I say, I’d be very interested in confirming the numbers of cards printed and it would appear that at least two of the earlier contributors have significant lists. I would be interested in adding my numbers to what has been collected to see what the whole scheme looks like

by eastlondonpostcard
Great contribution! Interesting to discover that there were two enterprises: Wrench Ltd and Wrench Postcards Limited.

From my London Art collection I discover there are a number produced/published by Wrench: I have referred back to my bible 'Picture Postcards and Their Publishers' by Anthony Byatt and discover that Wrench published an autobiagraphy which records the story of his Postcard Publishing: Uphill, The First Stage in a Strenuous Life.

The Links of Empire series comprised of two sets of ten and a further set of just four according to Byatt. The first set of ten was produced to record the cruise of the Duke and Duchess of Cornwall and York to Australia on the 'Ophir' - each one intended to be posted at each port of call, but many recieved London postmarks as they were transferred to another ship withut passing through the local post offices. A second set of ten was produced to record the homeward journey via Canada.

A third set of just four postcards was produced to record Scott's first Antartic Expidition, carrying special postmarks and the SS Discovery cachet; these are now highly sought after and expensive! There was friendship between Scott and Wrench that included a tale of Wrench giving Scott a handkerchief when he sailed from Tilbury after confessing that he had forgotten his!

According to Byatt too, the most outstanding set consisted of 96 postcards entitled 'Pictures from Punch' - one illustrated in his book is no. 10063

Further research today shows that Wikipedia gives a very good account of Evelyn Wrench's distinguished life, of which his Postcard enterprise played a small early part. I also note that there will be a talk in November at the Camden History Society about Evelyn Wrench's Postcard life - that should reveal a lot!

Best luck with the research, I will keep my eye out for other numbers and postal dates meantime.

by peternam
All you say is correct. And since I am giving the talk at the Camden History Society I can agree with you about it revealing a lot!

It may be of interest that Wrench hosted an Exhibition at the Grafton Galleries (off Bond Street) in October 1903 to coincide with his Coming of Age. The Exhibition - Art in Picture Postcards - featured about 150 postcards (or possibly the original artwork and photographs). These included some striking pictures of children - The Worlds Children - by Mortimer Menpes

by alanwarren.18
Sorry for being tardy in responding to some of the updates on this thread. Just to update my own research on Wrench cards, I now have almost 11,000 cards listed in my database of which about 10,000 I also have images for. My research currently indicates there were around 18,300 different cards produced by Wrench and their successors.

I can only echo the frustration for Wrench collectors/researchers with the vagaries and errors of their numbering system although I think I have managed to work out most of the problems (but many still remain!). I estimate it will probably take me about another 3 years (at least) to get my database completed as much as possible.

I actually collect Wrench cards with a railway theme (locomotives, stations, bridges etc) and have about 300 of these stored away in albums.

I will try to contribute more to this thread over coming months but just to remind everyone I live in Canada and there is an 8 hour time difference.

by alanwarren.18
Had a few spare moments so have set out below my current listing of the London colour cards in the 11000 series. Of course there are many, many other Wrench cards with various aspects of London illustrated but will save those for another day!

Hope this is of help.

Someone else listed 14573 London Bridge (which I haven't seen) so maybe this was a mixed bunch.

by CollectIreland
I also collect Wrench cards but only started in the last couple of months. I only collect Irish cards, and only the early ones at that, i.e nothing coloured is of interest. So far I have identified 128 individual cards but I'm sure that it's only the tip of the iceberg as Evelyn Wrench was originally from Ireland. I'm doing my own database of all Irish Wrench's, even those of no interest to me, and will post the details here in due course. The early vignette type cards have a real charm, whether unused or crammed with tiny writing, that all later cards with divided backs lack. It was the one below of the Custom House in Dublin that hooked me on collecting Wrench cards. 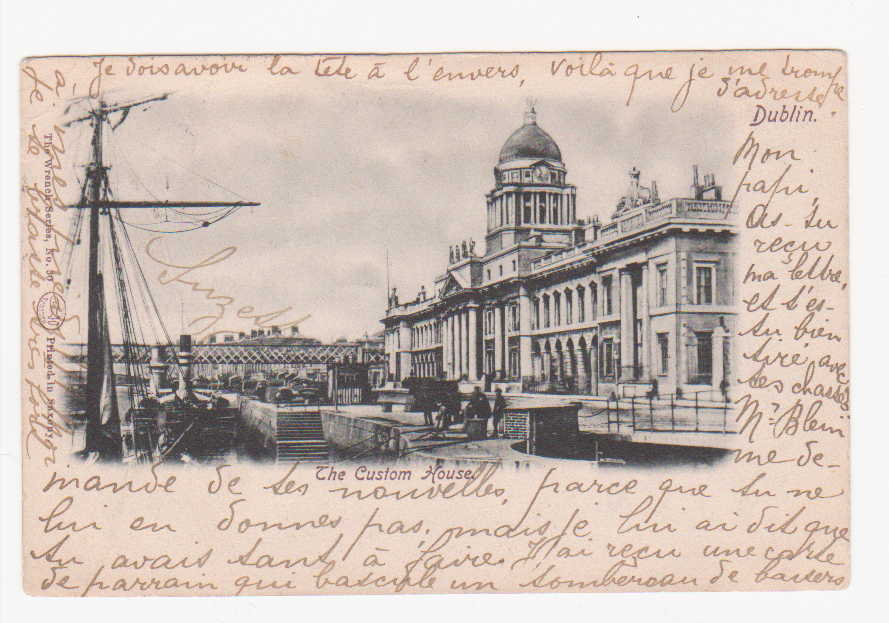 by CollectIreland
Up to 166 Irish Wrench's identified now and I've stepped up my purchasing too! I picked up the ten cards -pictured below - for less than €1 each including p+p on Delcampe's German site. All unposted and in mint condition. Just as well they were so cheap as I had to pay over £11.00 for the 'must have' Letterfrack card also shown below. 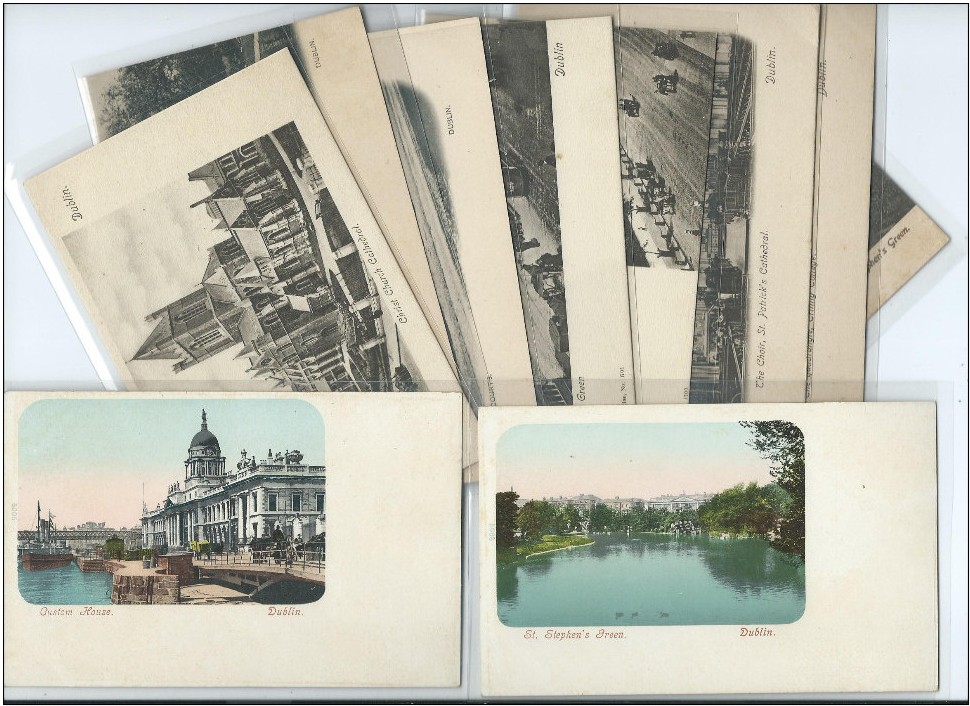 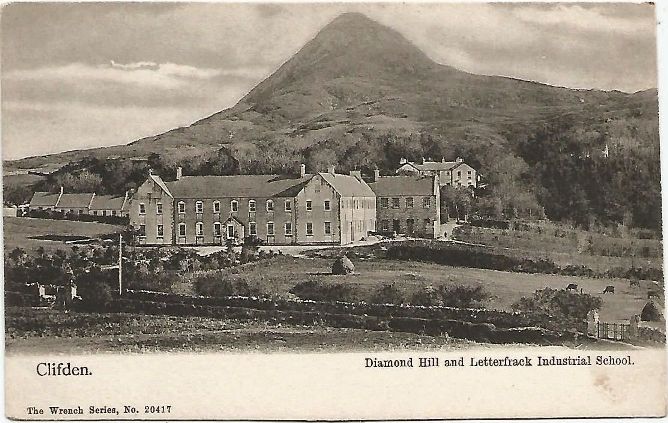