by CollectIreland
I posted about Hand Painted cards previously but it's lost in a thread about ebid here: http://postcard.co.uk/messages/postcard ... 1b0a#p4753

However, I feel that this Cinderella area of postcard collecting is worthy of a thread of its own - so here goes.

I set out a couple of years ago collecting printed artist cards by "Jotter" aka Walter Hayward Young but soon came across a couple of hand painted Irish cards that I just had to have and it's snowballed since then. Being such a niche end of the postcard collecting scene there's precious few Irish cards out there and I soon moved on to British subjects and have even been known to buy 'foreign' cards on occasion! My latest acquisition (below) picked up yesterday for just £5.95. 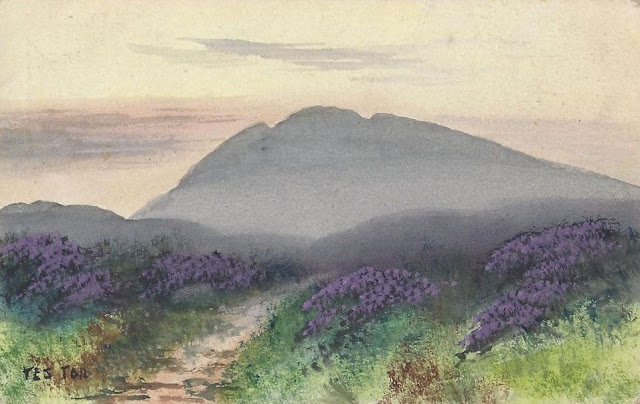 There are more on my Irish Postcards Forum here: http://irishpostcards.boardhost.com/vie ... d=107#p107

Anyway, I'll be back with more on this subject when I have gathered my thoughts. I would be interested to hear from anybody else who is collecting handpainted cards.

by CollectIreland
A couple of more purchases just arrived...

and a Cheery Owl that I took pity on as he was online for months with no takers - £2.50 on eBay.

by eastlondonpostcard
I like the handpainted/homemade postcards too... I don't really collect them, but this one is of the Tower of London and made me chuckle - a bargain at £2.50: 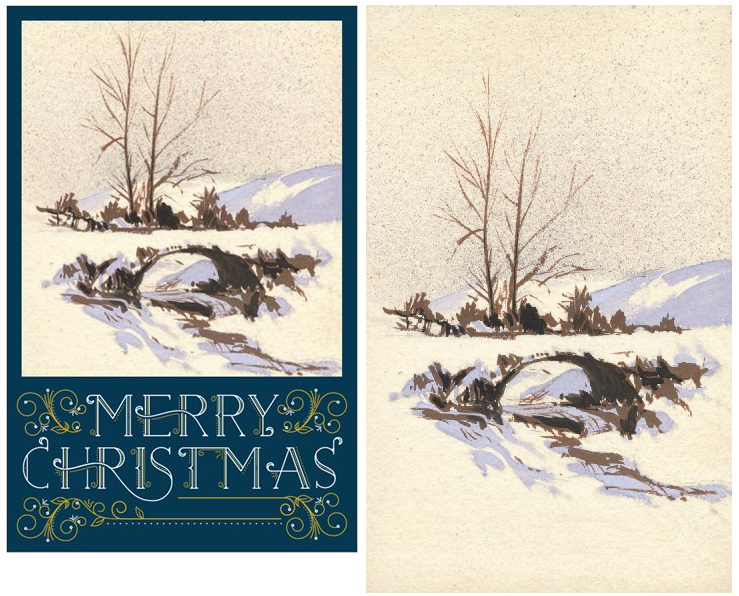 Just added this 1927 card to my collection - £10 on eBay incl.p+p. Destined to be one of my Christmas cards this year but not necessarily in this template. I just love giving an old card a new airing. On the left, in a possible Vistaprint design and on the right the original card (eBay scan). My final scan, when I receive the card, should produce an even better result.

by CollectIreland
Another mercy purchase and this one had been on Delcampe for quite a long time attracting no interest - not bad for just £2.40 including p+p. It has a certain simple charm and is a keeper. I still find myself having to wade through thousands of mislabelled cards - everything from hand-tinted cards through to original watercolour cards which inevitably turn out to be mass produced copies of an original. So many traders out there who either don't know their business or who are just plain lazy. 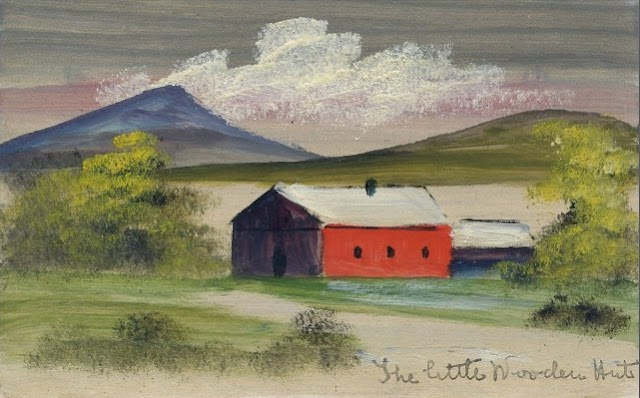 by CollectIreland
I continue to save lost souls and thought that this poor Robin - probably c.100+ years old - deserved to live again. All of 99 pence on eBay yesterday and I'm already toying with another Vistaprint Christmas card idea.

by CollectIreland
At last tonight I got partially to the bottom of a mystery that has been puzzling me for a while. I have been gradually acquiring a collection of cards 'seemingly' handpainted by an artist signing themselves O.A.S. but there was something about them that indicated that they might have been mass produced in cottage craft kind of way. However, until tonight I had never come across two of the same card but look below and see what you make of them. Clearly handpainted but with subtle colour differences. It would seem that the artist had cards printed with an outline drawing and painted them individually for sale? Or, I suppose, they could have been sold with the outline for purchasers to colour as they saw fit. The artist remains something of a mystery but I think that she may have been an Olive Adelaide Swanzy (b.1882) from Newry in County Down. More to follow.

by CollectIreland
And further confirmation today with a duplicate of another card in my collection turning up on Delcampe. Subtle differences in colours and it rather confirms my suspicion that the artist was running some sort of cottage industry.

by CollectIreland
My latest acquisition is this nice card titled "A scene in the New Forest" unposted but probably from the early 1900s - a bargain on eBay at just £4.95 including postage. That said if I put a price on the hours that I spend searching! 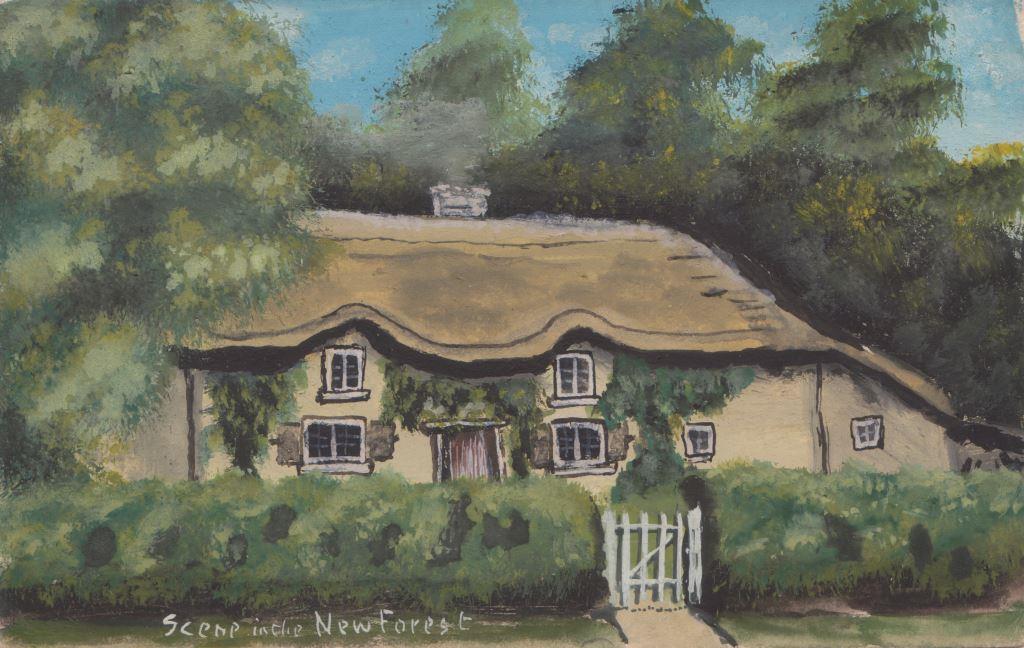 Surely some of you UK dealers must have some in your stocks?

Please contact me: collectireland@gmail.com if you have any to sell.

by CollectIreland
After a lean couple of months on the collecting front which saw me driven to emailing PTA dealers looking for hand painted cards, a load turned up on eBay. Between half a dozen rare Irish "Jotters", an equally rare OAS card, and two 'must have' handpainted cards of the Newport Arch in Lincoln I was stretched. I settled on three of the rarest of the "Jotters", the OAS card, and the two Newport Arch cards - joined by a "Jotter" of the same view.

I've been to Lincoln but not since 1977 and certainly knew nothing of the Newport Arch which turns out to be a very rare survivor of Roman architecture from circa 2 AD. https://en.wikipedia.org/wiki/Newport_Arch
There are many real photo cards of the Arch and it seems to have also been popular with artists. Interestingly, and not for the first time, the card which attracted my attention appears to have been a copy of "Jotter's" card published by Boots. The attention to detail by F.G.D in 1909 when copying "Jotter's" card is quite amazing and at first glance you would think they were identical. The F.G.D. card was in Australia, cost £28 incl.p+p and took the guts of a month to reach me. The second handpainted card of the Arch cost me just £2.75 incl. p+p from England. While it's a simpler card, it's well executed and it hits the spot - unposted and no clue as to its creation date. The "Jotter" card cost just £3 incl.p+p from (Delcampe)England. 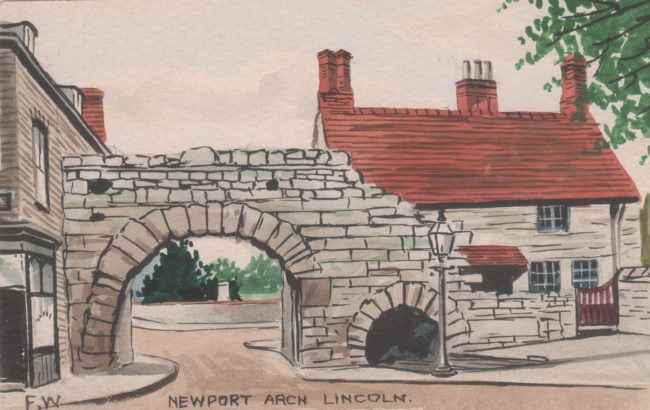